“No body can assure you a tiger”- we saw this during our safari at Tadoba and this is TRUE. How can you predict the behaviour of a wild animal after all? It  moves out of instinct, it moves driven by hunger, thirst , need to patrol the territory or need to meet its partner-so can we predict this behaviour and make ourselves available at the very spot where a tiger or tigress would come by?  Frankly speaking we do not know the answer but what we know is that there are factors that definitely increase the probability of tiger sighting in the Indian jungles-we would look at these factors in this series of articles that focuses on the key tiger reserves in India. We believe that the article will provide insights to a first time tiger enthusiast or tourist willing to visit the jungles to catch a glimpse of this elusive creature!

Overview of the Tiger Reserves

Below is a brief overview of the 4 parks before we move on to analysing them in terms of key factors for tiger sighting.

Bandhavgarh – Nestled amidst the Vindhayan Hills in Madhya Pradesh,the park is divided into four major zones, namely Tala, Magdhi, Khitauli, and Panpatta. The word Bandhavgarh is a combination of two words: Bandhav+ Garh where Bandhav means brother and Garh means Fort. So the meaning of Bandhavgarh is brother’s fort. The name Bandhavgarh given to the reserve is due to the presence of an ancient fort in the hillock of the Vindhya ranges of Umaria. Legend says  that Lord Rama had gifted this amazing fort to his younger brother Lakshmana.

Kanha -Officially known as the Kanha Tiger Reserve, it  brings all the fascinations for a true nature lover with its amazing landscapes. Kanha dwells in the central Indian highlands and amazingly hosts nearly half of India’s forests. The Kanha Reserve is located in the Maikal Range which forms the eastern base of the Satpura Range.

Pench– Pench is located  in the lower southern reaches of the Satpura hills and  is named after Pench river, meandering through the park from north to south. Pench is located on the southern boundary of Madhya Pradesh, bordering Maharashtra, in the districts of Seoni and Chhindwara. The area of the present tiger reserve has a glorious history-description of its natural wealth and richness occurs in Ain-i-Akbari. It is believed that Pench Tiger Reserve and its neighbourhood is the original setting of Rudyard Kipling’s most famous work, The Jungle Book.

Tadoba -Tadoba Andhari Tiger Reserve is one of the finest & largest National Parks in Maharashtra. This beautiful wild paradise is situated 45 km close to Chandrapur district of central Indian state Maharashtra. Its name ‘Tadoba’ is derived from the name of God “Tadoba” or “Taru” whiich is praised by local tribal people, whereas “Andhari” is derived from name of Andhari river. It is believed that Taru was the village chief who was killed in an fierce encounter with Tiger and thus a shrine was made in remembrance of God Taru. The beautiful Tadoba and Telia lakes are located within the park boundaries.

Why have we chosen these 4 national parks? This could be an obvious question in the mind of the reader and the below section would help us clarify some of this questions.

Out of 2200 odd tigers left in the country (as per last Tiger Census in 2014), nearly 25% are available in the Central belt primarily concentrated in the 4 reserves –so you definitely need to go to a place where tigers are there and regularly sighted rather than to some jungles where tigers may be there and are rarely seen.

For those interested in numbers, MP was once known as the tiger state of India and even in  the last countrywide census it recorded the second highest count in the country with 343 tigers.

Coupled with numbers we have tiger density and forest type as the other key factors that make tiger sighting probability high in Central India. Let us  substantiate this with the below table-

**As per media reports –

As we observe all the 4 reserves have substantial tiger population and very high tiger densities .Tadoba has the highest density among the 4 tied with Pench (MH) in the first spot. No wonder with higher densities and almost equal or less area compared to popular reserves like Bandhavgarh and Kanha, Tadoba and Pench have offlate become the Destination for tiger lovers!!

One can definitely ask about Corbett and Kaziranga the two reserves that have highest tiger count and density in the country respectively. Here is where we believe that the third factor plays a part in the sighting –forest cover or type of forest. Both Corbett and Kaziranga have very dense undergrowth, tree cover, tall grass (they receive more rainfall being much closer to the Himalayas) compared to the Central Indian belt. Narrow trunks of Sal Segun and presence of vast stretches of dry grasslands  and natural lakes, rivebeds provides extra edge to tiger sighing chances in the Central Indian jungles.

Nevertheless we will cover these two parks in the subsequent series when we intend to cover north and north-eastern reserves.

Indian tiger reserves remain open from October to June (with some variation in dates)-there is no exception for these 4 reserves also as highlighted below.

Forests remain closed during the monsoon (July to September) and immediately after monsoon during October to December forests wear a lush green cover with thick undergrowth and cold temperatures. With plenty of water available in the interior due to accumulation during the monsoons, tigers need not travel to the artificial or natural lakes /pool of water to cool off or quench their thirst.

As temperatures start rising from February onwards, forests gradually start drying up, water becomes scarce resulting in greater movement of tigers thereby increasing the chances of tiger sighting. During the peak summer season of March to May, temperature soars to above 35 degrees across all the above 4 tiger reserves and this presents excellent opportunity for tiger sighting!!

Even during this season there is one thing to keep in mind when one is visiting the reserves – tigers rest for most of the day to conserve their energy. Movement usually happens during early morning hours (may be between 5 am to 8 am) or during late afternoon (may be after 4 pm or so) when heat starts reducing. Thus Morning safaris present the best bet for seeing tigers during the period March to May.

Here we look at another key factor-popular zones with high probability of seeing tigers including the popular ones. Below table provides the zone with tiger names that are frequently spotted  – 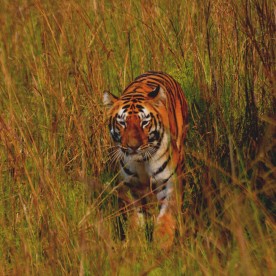 Maya with her cub

If one is planning to visit, one should book advance permits for these zones keeping in mind the high number of sightings that occur here.

For Badhavgarh,  Magdhi is the preferred zone while Kanha, Mohurli and Touria are the recommended zones for Kanha, Tadoba and Pench tiger reserves respectively.

Offlate Khursapar on the Maharashtra side of Pench reserve has also recorded good number of sightings in the just concluded season 2016-17.

Unlike other 3 reserves, Tadoba allows a tourist to explore the entire forest area irrespective of the gate through which you enter the park. This is unique to Tadoba and smaller eco tourism area compared to other reserves is the reason behind this.

Having discussed at length about various factors that contribute to tiger sighting in the wild, let us have a brief look at the logistics in form of safari permits and travel modes.

Safari should ideally be undertaken in open gypsies which can accommodate upto max 6 persons beside the driver and guide. Canter service is there and is cheaper but there are spots in the jungles which can be best explored by travelling in an open gypsy.

For Tadoba and Pench (Maharashtra), single permits are still not available. It costs 400 to 1000 INR to book permits with additional cost for camera depending on lens.

Please keep in mind that safari permits need to be booked in advance (in some cases this should be booked at least 3-4 months prior to travel dates for reserves like Bandhavgarh , Tadoba) to ensure that you are able to avail safaris for the desired zones.

For Pench (MH) and Tadoba, the booking of permits can be availed at-

LAST BUT NOT THE LEAST-GUIDE

Please keep in mind in addition to everything that we have analysed so far, there is another important factor –GUIDE. Guide does play a crucial role when you are exploring the jungles through his/her knowledge about areas, tiger behaviour , tracking movement patterns through pugmarks, enthusiasm etc.

Through our visits we do have contacts for some of the good guides in these reserves and would be happy to help anyone who wants to go there.

Tadoba -Nearest railway station or airport is Nagpur. Nagpur is well connected to all Indian major cities like Mumbai, Delhi, Kolkata etc by train and flight. Tadoba is around 3.5 hours away from Nagpur by road (approx distance 190 KM)

Pench– Nearest railway station or airport is Nagpur. It takes approximately 2 hrs by road to reach Pench from Nagpur (80 KM)

Kanha– Nearest airport or railway station is Jabalpur (170 kms) which is well connected to Delhi, Mumbai, Hyderabad, Bhopal and other major cities. Second best option is Nagpur (290 kms).  Also Raipur airport (260 kms) can be preferred as the third option.

Do let us know how was your trip to the tiger reserves-happy tiger sighting !!!!