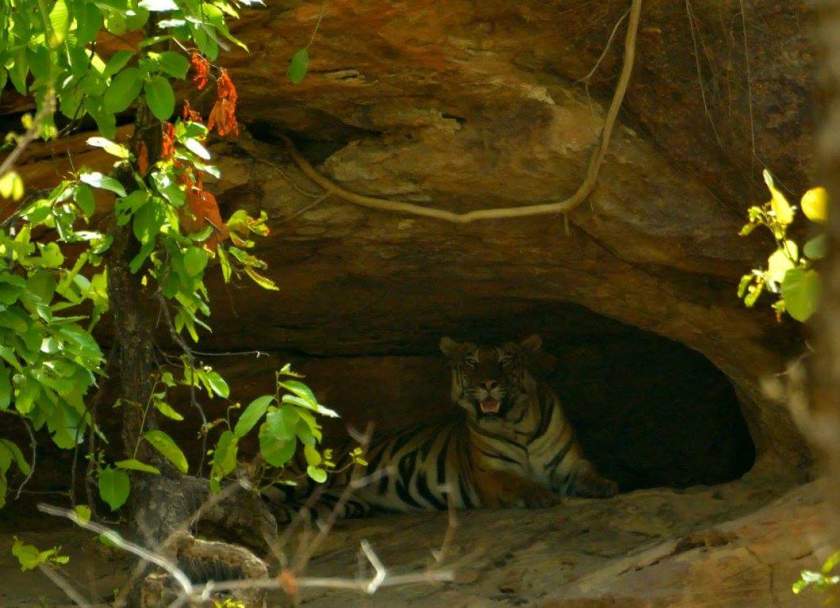 “Behind every successful Tiger Female in the wild, there is a Male” – sounds strange isn’t it?  But probably in the context of tiger society this is TRUE.   A mighty male is one of the key reasons why females are safely able to bring their cubs to adulthood – with shrinking forest cover and high mortality of tiger cubs this is a critical role that Male tigers must continue to play for the tiger population to sustain in the long run.Males are dynamic as we found that over the course of our encounters with them at Kanha, Tadoba and Pench. They command large territories , mate with multiple females and eventually father many litters in the process. While females ensure that cubs are reared and taught the necessary skills to fend for themselves in the wild, males are tolerant towards their offsprings and provide them the much-needed protection from other invading males or other predators! So behind Sita (the matriarch of Bandhavgarh) there was the legendary Charger and after Machli , the Queen mother of Ranthambore gradually retired to one corner of Ranthambore her son Jhumroo passed on his  genes ( Machli’s legacy) by giving  Ranhambore some of the finest tigers like T24 (Ustaad) , T25 (Zaalim) through multiple partners.

We had started with Bandhavgarh but as luck would have it , could not see any tigers there . Well disappointment turned into delight at Kanha where our guide virtually awakened us –“Saab Munna soh raha hain” (Sir, Munna is sleeping). We looked at each other –“Who is Munna?”. Yes we were ignorant but as we followed our guide’s fingers we could see a tiger sleeping amidst the bushes.

Munna is one of the most powerful tigers at Kanha and a true legend who has commanded large territories over the course of his  time. Our guide asked us to see Munna with the pair of binoculars we had – what did we see ? The word “CAT” symbolized on its forehead!! The only tiger known with such a mark – a God’s gift ! As the story goes , Munna was once sighted limping off after a fight with another tiger and those who saw were reminded of their guide friend Munna who also walked in a similar fashion. That’s how this legend got his name -Munna. Munna is known for his flamboyant walks across long distances and we waited eagerly for him to perform the Catwalk but that day Munna preferred to lie down- typical of tigers who prefer resting most of the times . Munna has become old but he is still there – a symbol of resilience and might that is the hallmark of a great Male tiger. He has also ensured that his legacy lives on through his next generation (like Chota Munna )

Well after Kanha, we researched more about our next destination-Tadoba. Names like Madhuri, Wagdoh, Maya surfaced among the popular tiger personalities there but there was one who probably stood out-Gabbar.  Gabbar was undoubtedly the most dynamic among the tiger personalities at Tadoba-it is said that he was a very powerful male who fought like anything . Probably that is the reason , the infamous title “Gabbar” (after the renowned dacoit character Gabbar from all- time hit Hindi movie  Sholay) was bestowed on him !

As we explored Tadoba , Gabbar was found one day near a lake . He was cooling himself off and had  a radio collar around his neck. Guide informed us about a famous incident where Gabbar was badly injured in a territorial fight with another male tiger. These fights are so fatal at times and even in the case of Gabbar , those who had found him almost assumed that he was going to die. But Gabbar miraculously responded to treatment and he was released back to the Tadoba again . To monitor his movements , he was radio collared . As we heard his story, Gabbar slowly walked across our gypsy and gave a glance at us . Yes that was the first time a male tiger had looked at us -perhaps to say “ Don’t worry I will not leave Tadoba till I die “ . We call him Gabbar the great -the ultimate male tiger who came back with all his might and determination defying age and younger opponents .

By the time we visited Pench, we had developed some idea about the might of the males in the Indian forests but then those we had seen were already past their primes. Here we wanted to see someone who still rules a large territory and is fathering litters . Do we have someone at Pench ? Our guide informed us about Raiyakassa . Well not as well known as Gabbar and Munna but Raiyakassa has probably surpassed them given the facts that surfaced infront of us.

We all know Collarwali -the world record holder among tigers in the wild. She has given birth to 26 cubs and is currently looking after her 7th litter!! At Pench, she is known as Mataram but behind Mataram stands the powerful Raiyakassa Male who has been with her for the last 4 years or so and has fathered her last 4 litters!! Just like Sita and Charger, Collarwali and Raiyakassa are building Pench by providing a healthy future generation of tigers.

Just like Munna and Gabbar, Raiyakassa also have  his story. He is named after the place of origin called Raiyakassa within Pench. He has another name – Sula . Sula name was given to him due to the inverted sign of wine glass on his left leg (Sula is an Indian company based out of Nasik)  and left cheek also. We saw him patrolling his vast territory -apart from Collarwali , we were told that he is also fathering the litters of Langdi tigress. As our gypsy stood on one side, we were glued to the majestic gait of this well-built,  muscular male tiger who is not only holding on to his kingdom for the past 4 years but also contributing in a large way to the survival of his species amidst such turbulent times for tigers in general!Raiyakassa gradually disappeared into the forests and we wondered whether  we have seen the last of the great males who have ruled  Indian forests !!! 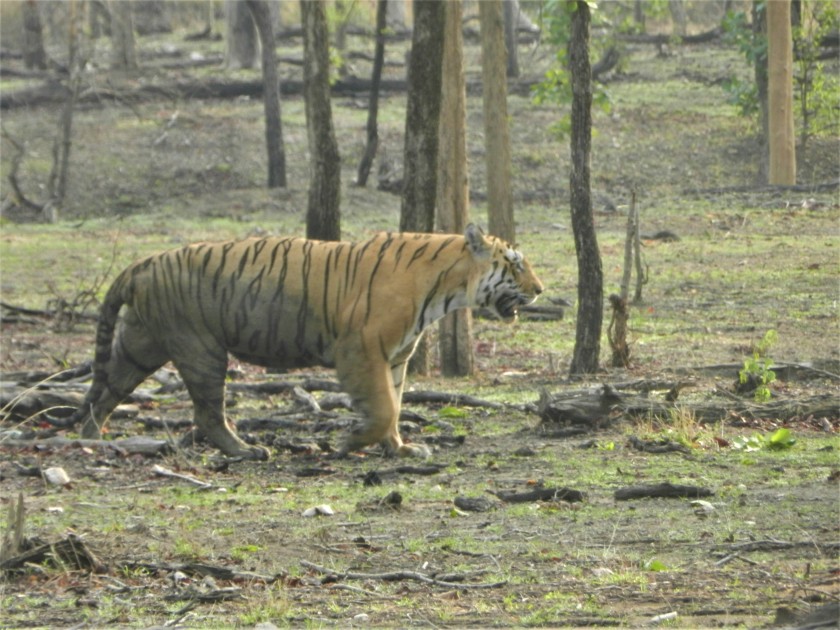 India is losing tigers (there are no second thoughts about this) and with forest cover going away, conservation efforts within reserves would be of little use if some connecting corridors between forests are not established . With corridors,  the tigers (particularly the males) who do not find space within protected areas (due to old age, injury or loss in a territorial fight ) can wander to new regions or habitats and hope to re-establish themselves avoiding conflict with humans. Easier said than done we know but probably this is required for the survival of this apex predator (India being  home to 70 percent of the world’s tiger population) As legendary  Jim Corbett observed- “tiger is a large-hearted gentleman with boundless courage and that when he is exterminated—as exterminated he will be unless public opinion rallies to his support—India will be the poorer, having lost the finest of her fauna”