She seemed lost in thought-her head resting on her paws.Occassionally she was raising it to scan the surroundings, drinking water , licking her paws. “Is she worried? ” I asked Viswas, our guide. “No idea Sirjee. Could be as her first litter did not survive and the current one is also in danger”. Ever since we reached Tadoba, news of this tigress and her cubs have been doing the rounds. Her name is Maya-she is the famous Pandharpaoni female of  Tadoba Andhari Tiger Reserve. Every time Tadoba comes up in dicussion , Maya’s name would feature in it. She is famous but she is not merely an adult tigress -she is also the mother of 3 one-year old cubs. Those who have travelled , read and known Indian forests would acknowledge the role of a tiger mother. Some of the famous tales of our forests are built around the mothers be it famous Padmini of Ranthambore or Sita, the matriach of Bandhavgarh or Collarwali , the mataram of Pench. And those who don’t know anything about tigers know one name for sure-Machli, the famous mother of Ranthambore , a tigress known for her boundless courage fighting against adversity  and emerging as the winner. Machli fought the big males and a crocodile to protect her cubs-so what would Maya do? Will she follow the same path? Answer lay in the events that unfolded before our eyes as we explored forests of Tadoba over the next few days. 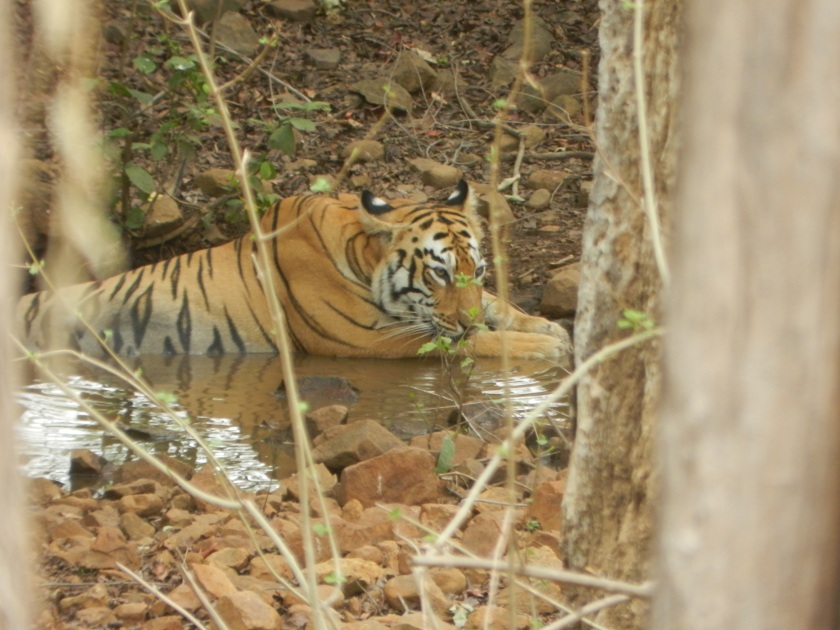 How the Drama Had Unfolded

A tigress is known to rear cubs who stay with her for 18-24 months before they gradually disperse with the male cub (if present) in the litter leaving his mother first. Here Maya has been separated from her one-year old cubs and there were concerns about whether the cubs would survive or not!! But why did Maya leave her cubs? We got the answer when we saw the big male Matkasur-he was after Maya and wanted to mate with her. Many had seen Matkasur with Maya and he was definitely not the father of her present litter. He had chased one of the cubs on the morning we had arrived at Todoba and afterwards he was seen following Maya. The cubs had run for cover almost bumping into tourist gypsies out of fear. Viswas was relating the incidents when suddenly out of the bushes a tiger sub-adult cub emerged . It was franatically running and stopped for a few seconds to look back. Afraid of something? “This is Maya’s male cub sirjee” -an excited Viswas told us and just as he said the cub started running again. Was Matkasur after him ? It definitely looked as if it has been chased-fear was reflecting in its actions as it went out of sight. What is going on? 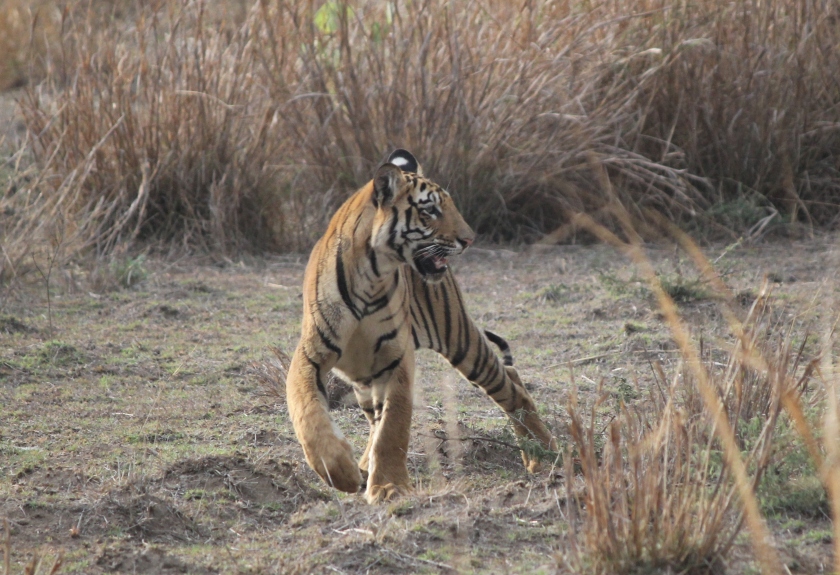 That night we discussed over the dining table and could put together the missing pieces in the drama that was being enacted in the forests of Tadoba. Maya has been forced to separate from her cubs as big male Matkasur would kill her cubs for sure (thats how the rules of the jungle are). She probably doesn’t want to fight (not sure she stands a chance given the size and frame of Matkasur ) . So is she doing it the other way? Luring Matkasur away from her cubs so that they can survive while she keeps him busy by pretending to surrender?

We saw Maya the next day, the last day of our safari. She was all alone -doing what a tiger does .Found in a waterhole cooling off, she rose after a few minutes and started walking .  She went on marking  trees (leaving trails for Matkasur to follow?) , rubbing her neck against the trunks,  going around the gypsies completely indifferent to the people around. Her cubs were nowhere to be seen as expected. As she went out of sight, we only hoped that her strategy of staying away from her cubs pays off-Matkasur remains lured by her charms and forgets about killing the cubs!!

After we came back , I called up many times to find what had happened everytime anxious to know the fate of Maya and her cubs in particular. What I heard and read surprised me even more. There was another male-the great Gabbar who too was after Maya and the pair had been sighted multiple times. So Maya had her task cut out-two big Males stand between her and her cubs!! It was reported that she had mated with Gabbar too. Gabbar probably won the fight against Matakasur and now could stake claim to the territory of Maya- territorial fight is common among Male tigers in the forest and one who wins also owns the females in the territory-does it sound familiar? The charming Maya had her effects on males of all ages -old Gabbar and young Matkasur !!

Good news arrived after  a couple of anxious weeks when Maya’s cubs were found hunting small animals -it seemed that they were close to adulthood and could survive without the presence of their mother as she kept the big males occupied. One of the scientists gave his verdict-“Maya’s territory overlaps with four males. Mating with them is the best strategy she adopted to save cubs. Had Maya been defiant, she and her cubs could have been either harmed or killed by the other males” .

The theory finds support in the writings of  noted tiger conservationist Valmik Thapar, who in his book “Living with Tigers” observes the following about legendary Machli when she was left to rear cubs without the protection of a resident male-

“Even without a resident male, Machli had managed to keep her male cubs safe.She probably did this through a combination of seduction and aggression with the males that she came into contact with”

The entire episode gradually drew to a close as Maya succeeded in her role of a mother . Today as we speak , Maya is raising her third litter under the watchful eyes of her current partner Matkasur (he now controls the territory of Maya ) and she is more at ease compared to what had happened in 2016.

Maya – on road to greatness?

Maya’s behaviour does throw light on the indomitable spirit of a tiger mother- unlike Vijaya of Bandhavgarh who lost her cubs despite making repeated attempts of raising litters and controlling her terriotry Maya triumphed against all the odds and saved her litter. She showed remarkable presence of mind , boundless patience and unmatched skill of managing the males  -three key traits that probably defines a great Tiger mother along with her obvious ability of hunting regularly to feed the cubs!! She seems destined to be crowned the queen of Tadoba ready to take on the throne left vacant by great Madhuri (who still raises another litter in the buffer zones), the Queen mother of Tadoba. Can she be compared to the likes of Machli or Collarwali ? Well still some distance to go may be but to her cubs and those who see her regularly , she epitomises the lines -“Of all gifts that Nature has to offer to living beings, Mother is the greatest of them all ”