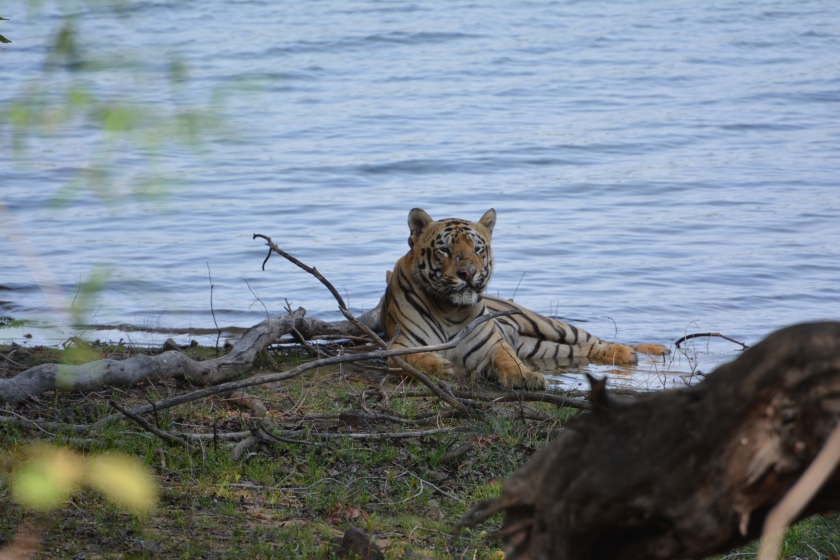 First rays of the rising sun gradually illuminated the word “Corbett” on the board outside
Bijrani zone. It was time to move into India’s oldest national park and as the gypsy moved in. Our guide informed us about a tiger which had killed two people couple of days back and had subsequently died during the capture operation yesterday. Was it about to turn into a man-eater- a question to which the guide did not have an answer. India’s tigers (increasing offlate) are still killing people ever since the Europeans started maintaining account of the tiger encounters. So though to us it is a powerful and beautiful animal, to most others it remains a symbol of ferocity , cruelty and evil that is responsible for misery of many human lives that live on the forest fringes! Everytime we pack our bags to head for the forests in search of the elusive yellow and black stripes amidst the green foliage, a statutory warning is issued “Be careful, gypsies are open!”

Can the tiger ever get out of the myths that are more deep rooted than its own existence?

Corbett’s hunting stories present man-eating tiger stories from the early part of 20th century.
He though put forward a theory in defence of the man-eaters- they are either injured
(injured paw or legs or broken cannines) or old or weak tigers . 90% of the man-eaters killed fell under this category. But when we read Professor Ratanlal Brahmachari’s article on tigers we know about 20-22 cases where healthy tigers regularly made man its prey. So obvious question that lingers -why do tigers kill men? Driven by hunger -that’s what J E Carrington Turner an IFS officer of British India believed. With habitats shrinking every passing day ,usual prey base (deers, wild boars, buffaloes, gaurs ) diminishing every now and then, tigers do move continuously bringing them in close proximity to humans. Possibly out of this struggle for existence , emerges some tigers who suddenly start killing humans for food !!
There are places in India like Chandrapur, Pilhibit, or the Sunderbans where tiger attacks and kills people but isn’t it more because of the rising conflict circumstances when human settlements start establishing its authority near the forests? Tigers do go near villages to lift cattle is most cases and not human beings and are poisoned or killed many times. (Bandhavgarh and Ranthambore present such individuals like Fateh)
As per environment ministry , 92 people were killed by tigers between April 2014 and May 2017 . Not all killings can be attributed to “man-eaters” -at Bandipur for instance few tigers were labelled as “man-eaters” during separate instances after they repeatedly killed and dragged victims. One of them was killed during operation while other was captured. Tiger captured had injury on its paw and was hungry!! Couple of years back at Tadoba , when Matkasur had killed a forest guard (did not eat his body) he was not labelled a man-eater.
He hasn’t reportedly killed anyone since then. Who can forget the famous case of Avni
tigress in Maharashtra who was labelled a “man-eater” and was eliminated by a private
hunter amidst nationwide protests by wildlife activists and animal welfare organizations ! Sunderbans which account for nearly 25% of human kills by tigers has people venturing into forests for fishing, crab hunting or honey collecting. Needless to say, they sometimes are taken away by a tiger. Some people attribute this to excessive salinity of the water that tiger drinks making them irritable but these remain largely inconclusive. Wildlife biologists like M. Moninul Khan (working on tigers and other wild animals of Bangladesh) too believes that there is absence of concrete evidence to prove the man-eating theory and it may be a behavioural character manifested in some tigers at Sunderbans. Now on an average, one kill is required for tiger every week so imagine the number of humans that would have been killed had they been the natural prey!!
In the 100 odd safaris that we have undertaken over years there have not been a single
instance of tiger charging though -tigers passed by , looked back at us straight into the eyes but never charged! Youtube videos may show Charger (Bandhavgarh) , Fateh (Rantambore) charging gypsies or tigress from Kaziranga jumping onto an elephant to attack (it was stressed being separated from her cubs) but these are incidents which are few and far amidst the innumerable safaris where people relish tiger sighting from close by and yes the gypsies they use are open !”Man-Eater” may not be the right word to describe a tiger after all and in its latest standard operating procedure released last year NTCA has discarded the use of word “man-eater” for conflict tigers!

Tigers are Ferocious and Cruel

A ferocious beast that sometimes kills its own kind and doesn’t show any emotions-usual
beliefs associated with a tiger! But at Tadoba we heard and witnessed the remarkable
struggle of a tiger mother Maya desperately trying to save its young from other bigger male tigers. Same behavioural pattern is observed at other forests like Ranthambore ,
Sunderbans where tigress lures away the intruding male to protect the young. There are
male tigers who kill others’ cubs to force the mother to mate again or fight with other males to establish territory but is this trait enough to make it cruel? What can we say when we hear about Zaalim (T25) (misnomer for sure) taking care of the cubs after their mother died at Ranthambore? Isn’t this emotional bonding puts it at par with us, humans? In the same forest, we have witnessed Aurangazeb (T57) being tolerant of the cubs of his partner Noor (T39) -the cubs belonged to Ustaad (T24) who was moved away after being labelled as “man-eater”. At Bandhavgarh, a tiger acted as babysitter for his siblings (who belonged to separate litter from his mother) when his mother left for hunting .(The Babysitter of Bandhavgarh, Kim Sullivan 2012)
We understand there are emotions or feelings that spread through the tiger society but are probably invisible to human eyes. Bandhavgarh guides or old-timers would tell you about Charger calling for his mate Sita after she disappeared one day or at Pench you would hear about the story of Collarwali and Raiyakassa being together for more than 4 years building the foundation of future generation of tigers. Whether you want it to call it “love” or wait for more examples is entirely your discretion but tiger society probably is more than just being synonymous to simple ferocity or cruelty. Picture: Love between a Mother and her cub

Every time a tiger stalks its prey and sets a target , it is successful. Well not really. Within
the forests, the tiger has to hunt in complete cover and silently move as close as possible to its prey – there is a short burst of speed before the tiger catches its prey and kills finally by strangulation. How many times is this event successful for a particular individual? Wildlife biologist George Scaller researched to find that out of 20 attempts only one such attempt is successful – a mere 5% of the hunts is successful ! Tiger conservationist Valmik Thapar estimated same to be 10% . So most hunts end in failure unlike the usual notion of “sure success” . We discussed about what hunger can do a tiger -well it drove four tigers to form a coalition (sisters from the same litter) and kill together. The story of Telia sisters from Tadoba belies the usual theory that tigers kill and eat individually. May be they still do most of the times but then Valmik Thapar did record an incident of nine tigers on a nilgai kill (led by famous Padmini tigress ) at Ranthambore and not all were related to each other at Ranthambore.

Should these be treated as mere exceptions or should we generalize and
conclude that like human beings tigers also think and act as per the circumstances or
situation?
Tigers’ Affinity to Water 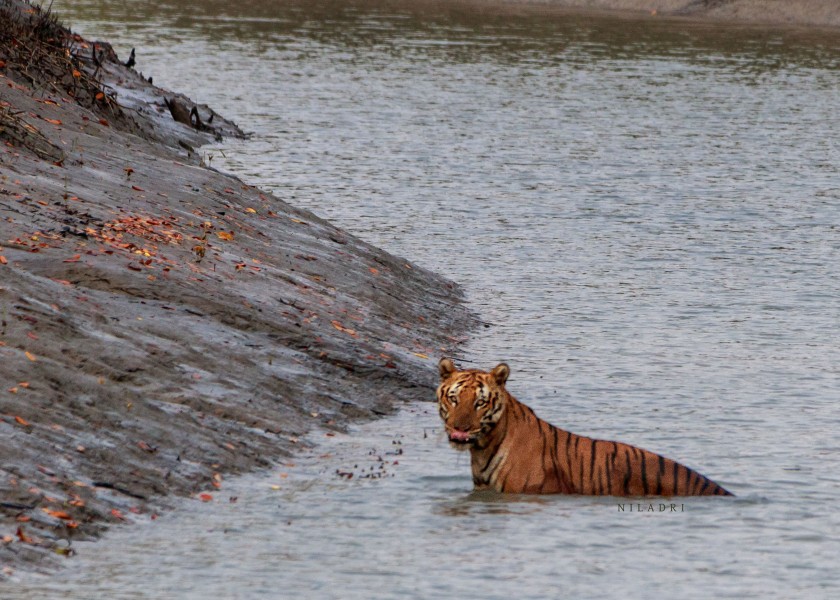 Picture: Tiger after swimming a channel at Sunderbans

Water is a basic need for almost every living being on earth but tigers unlike other big cats have developed unusual affinity towards it. Probably because of the humid climate
(temperatures soar well above 40 degrees sometimes) and habitat in Indian subcontinent, tigers are observed to spend substantial time cooling off in the water bodies with their backs submerged in water. They do not like water in their eyes and prefer scanning the surroundings while resting in water. Lakes or water bodies in Central Indian forests or those in Ranthambore or South India present many such sightings to tourists and observers. At Rathambore tigers have even adapted themselves to chase and hunt prey in the lake waters evident through stories of tigers like Chengis who specialized in hunting in the lakes. Tigers are expert swimmers too as seen in Ramganga river in Corbett or the vast Sunderbans in the east. Sunderban tigers are now known to overcome the continuous challenges of high and low tides in their epic struggle for survival in these swamp forests everyday. So water isn’t only there for drinking after all.
Tiger Colour-White or Golden Tiger

There is a general belief that white tiger is a separate subspecies but in reality it is
pigmentation variant of the Bengal species . For a white tiger to be born, both parents have to carry the gene for white colour -probability of same is 1 in 10000! So while zoos through inbreeding have white tigers for entertainment purpose, in wild it is very rare. The last wild white tiger was killed in 1958.
Offlate, an individual has been photographed in Kaziranga since 2014 . She has lighter
yellowish skin with lighter black stripes and more whitish expressions. Biological reason of colour aberration may be due to excessive inbreeding caused by habitat destruction and connectivity loss. Recessive genes are showing up and study by Cardiff University along with NCBS have found 93% of tiger genes are no longer there. So no separate sub-species exist in form of white or golden tiger but instead there is need to prevent inbreeding which usually lends this type of colour aberrations!
As we celebrate Global Tiger day every year, the tiger lovers and conservationists will surely pledge to continue their support to conserve one of the finest fauna (read tiger) in India and beyond (there are 12 other tiger range countries) .

But it has become equally important for science to replace some of the myths and notions surrounding tigers with hard facts.Only then human mind in general can be freed of the “cruel” image of tigers and /or false “beliefs” associated it and the tiger will find its place in the human heart and conservation would become a reality.